Webpages on this website:
A webpage with a bunch of links.
Homepage
What do I think about politics?
Libertarianism
Why I don't eat meat.
Vegetarianism
Could the universe be a giant computer?
Digital Physics
Why I like languages.
Linguistics
Why I like computers.
Informatics
My advice on how to recognize and deal with false sciences.
Pseudosciences


Toponyms are often affected by the linguistic phenomenon called tautology. A toponym is often composed of more words in different languages meaning exactly the same. A famous example of that is Torpenhow Hill.

My Interpretation of the Croatian Toponyms 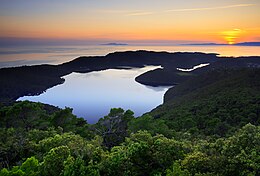 The Salt Lake
on the Mljet Island. It's sometimes suggested
that the islands
were once the places richest
in toponyms, because people
had to use
every single source of
fresh water and every single
piece of fertile land.

So, I was asked to create a web-page in which I summarize my alternative interpretation of the Croatian toponyms, which I have supported on many Internet forums and on some conferences (full text is available in this PDF on the page 70), so that we have everything about it on one page. Here we go!

ATTENTION: Some of the opinions stated in the following text are contrary to the mainstream science. I will not advise you to read it if you don't have a substantial background in linguistics. I am not a conspiracy theorist who wants to bombard people with controversial statements they don't know how to evaluate, and I am not denying it is possible my work is to historical linguistics what Anatoly Fomenko's work is to history. If you are ready to read it, click here.

Pozdrav,
Dubravka If you are not able to understand it, not even using Google Translate, which usually does a good job translating Croatian to English (though not the other way around), perhaps you shouldn't proceed reading.
Anyway, I find the arguments rather weak, primarily because the mainstream linguistics considers the name "Issa" to be related to the toponym Antissa on the Greek island of Lesbos, and Vis and Lesbos are even further away from each other than Vis and Daruvar are. As for the Celtic suffix "-issa", it probably doesn't go back to Proto-Indo-European for it to be relevant here, since Proto-Indo-European phonotactics generally avoided geminates (show/hide details). There does indeed appear to be a suffix "-issia" in Illyrian. As for the differences in the grades of ablaut, that's not so surprising if you take into account that there were two words for spring in Proto-Slavic that were different only by a grade of ablaut, *virŭ and *vorŭ. Again, I can't promise you (and probably nobody can) to know all the relevant technical details.
Here is how Dubravka Ivšić responded to the question "Why would you assume that the suffix -issa, found in Celtic languages, also existed in Illyrian, when it obviously couldn't have existed in Proto-Indo-European (whose phonotactics didn't allow geminate consonants)?": Ako je sufiks -issa postojao u ilirskom, onda je to bio ilirski sufiks, kao što je svaki sufiks kojim se tvore hrvatske riječi hrvatski sufiks.
Međutim, postavlja se pitanje što je to ilirski. Po onome što se danas zna, čini se da se naziv "ilirski" koristi za domorodačke indoeuropske jezike na našem tlu (i šire) koji su se govorili prije latinskog i grčkog (neko vrijeme su supostojali), i čije su jedine potvrde toponimi i antroponimi zapisani latinskim i grčkim slovima. Vjerojatno je bilo više "ilirskih" jezika (npr. liburnski, delmatski, histarski) i nije jasno koliko su bili srodni. U novije doba govori se i o jednom takvom "panonskom" jeziku, kojem bi pripadali i (neki) predslavenski toponimi u sjevernoj Hrvatskoj. U sjevernoj Hrvatskoj još postoji i teoretska mogućnost keltskih toponima (iako je samo Carrodunum sigurno keltski), pa ako je Certissa keltskog podrijetla, onda je u njemu sufiks -issa keltski. Uglavnom, to je metodološko pitanje - kako ćemo što definirati, a o svemu skupa ima premalo podataka da bismo išta sigurno tvrdili.
To što u praindoeuropskom nisu postojale geminate ne znači da se one nisu mogle razviti u pojedinim jezicima. I'll leave you there to decide for youself. I took that as an admission that the mainstream interpretation of the names of places in Croatia goes against not only combinatorial evidence, but also against accepted facts (though not strictly, it's possible, although it's unlikely, that the identical suffix developed in both Illyran and Celtic) from comparative linguistics. While linguistics is not a science in the same way physics is, that doesn't mean such things don't matter.
By far the most common counter-argument I get is that, if a toponym doesn't come from Croatian, perhaps it comes from some other attested language, the most commonly proposed being Latin. Most of the such proposed etymologies can be easily refuted, click here to see (or hide) how. 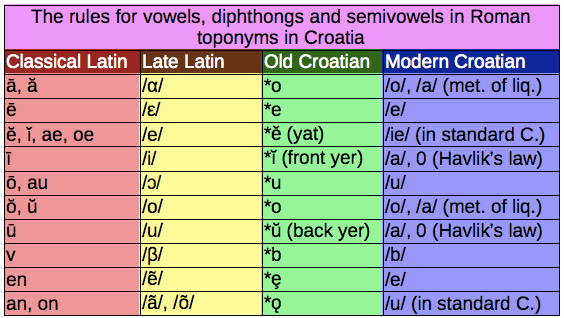 Srdačan pozdrav,
Dubravka Ivšić Majić A question I often get asked is how I know I'm not a victim of the Birthday Paradox, that it's not that the toponyms came from unrelated languages, and that the apparent patterns I see, although they seem unlikely at the first sight, have arisen randomly because such patterns are actually bound to occur. You can see (or hide) my response by clicking here.
So, one of the most striking patterns I see in Croatian toponyms is that 5 river names start with k(+vowel)+r: Krka (once in Croatia, and once in Slovenia, but near Croatia), Korana, Karašica (2 rivers with the same name, both in Croatia), Krapina and Krbavica. So, since there are around 20 consonants in a language, there are around 20*20=400 possible consonant pairs for a river name to begin with. While not all consonants in a language occur equally often, an average language has slightly more than 20 consonants, so we can assume those two errors approximately offset each other out. Let's assume there are around 100 river names in Croatia (it's a safe assumption, since many river names both repeat themselves and have obvious Slavic roots, so they don't count here). What's the probability the same consonant pair will appear 5 times if the names were really random? Let me be clear, we are not asking what's the probability that this particular pattern of k(+vowel)+r would appear in the river names, we are asking what's the probability that any such pattern would appear. This is the equivalent of asking: If you randomly choose a number between 1 and 400, 100 times, what's the probability you will choose the same number n times? So, because of the Birthday Paradox, it's indeed hard to calculate that probability analytically, but I've made a computer program that estimates that numerically. Here it goes in the C programming language (my favorite compiler for C is TCC, by the way, but this program is also easy to compile to JavaScript by Emscripten, you can see it done here): #include <stdio.h> #include <stdlib.h> #include <time.h> int main() { srand(time(0)); int number_of_repeats; scanf("%d",&number_of_repeats); const int number_of_rivers=100; float sum=0; int counter[400]; for (int i=0; i<10000; i++) { for (int j=0; j<400; j++) counter[j]=0; for (int j=0; j<number_of_rivers; j++) counter[rand()%400]++; int max=0; for (int j=0; j<400; j++) max=(counter[j]>max)?(counter[j]):(max); if (max>=number_of_repeats) sum++; } printf("%f\n",sum/100); } So, that program estimates the probability of there being a consonant pair appearing at the beginning of the river names number_of_repeats times, where number_of_repeats is entered on the keyboard. 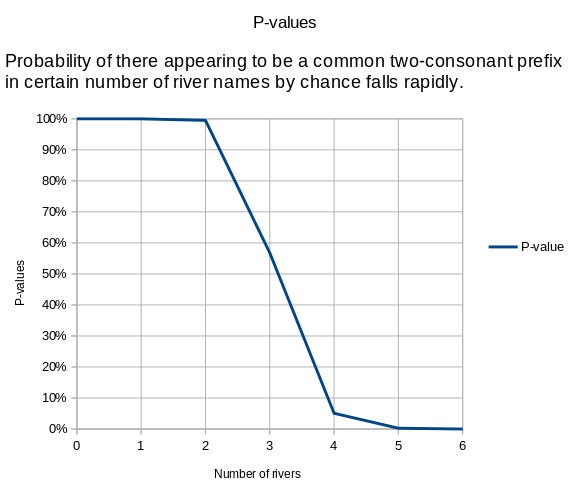 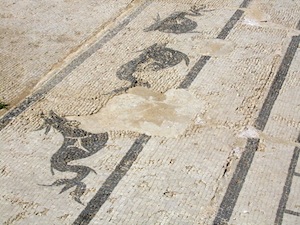 The Roman Thermae
in Issa (Vis)
were getting the water
from a mineral spring
that doesn't exist
any more.
However, it's possible
that Issa was
named after it,
from the Indo-European
root *yos (spring).

That would be it! If you want to discuss my theory, go to the "Croatian Toponyms" forum thread I've linked to on the left. I'd like to have some sane opposition there, because I think my interpretation may be right. Ideas are correct or incorrect independent of their creators. The fact that I am not a linguist specializing in those things doesn't mean my ideas are wrong. I've used the methods that are well-accepted in linguistics (apart from applying statistics to the toponyms, which is for some reason very rarely done), I've just come to the conclusions that are different from the mainstream ones.
UPDATE on 09/07/2018: You can download my Illyrian-Croatian dictionary here (it's a .DOCX file!).