Webpages on this website:
A webpage with a bunch of links.
Homepage
What do I think about politics?
Libertarianism
Why I don't eat meat.
Vegetarianism
Could the universe be a giant computer?
Digital Physics
Why I like languages.

See also:
Croatian Toponyms
Indo-Austronesian
Linguistics
Why I like computers.
Informatics
The webpage you are currently browsing.
Pseudosciences


The pseudoscience that had the most dangerous results were probably the Trofim Lysenko's agricultural recommendations. They played a major role in the Great Chinese Famine of the late 1950s and early 1960s. Anti-nuclear movement and global warming denial are similar in their logic to Lysenkoism, and can easily end up being about as dangerous, if not even more.


My Experience with Pseudosciences

Do you know how,
for example,
the mathematicians
know the Pythagorean
Theorem is correct?
In school,
we aren't taught
how scientists
know what they know.
at least wherever there are some people fighting for the truth (because at least some of them will be too ignorant for that).
To understand why, consider the case of SCIgen. It's a computer program that generates nonsense in the form of texts about informatics, using the vocabulary typical for them. Those texts were sent to a few well-known peer-reviewed journals. Most of them rejected them, yet some of them accepted them. When asked why, one of the recensents responded that it didn't make sense to him either, but he attributed its apparent incoherence to his own lack of knowledge in that particular field of informatics (Here is a paper I've recently written about informatics, I can understand how somebody might have a hard time differentiating stuff like that from gibberish.).
Pseudosciences are widespread because of the way people react to nonsense: they ascribe the apparent incoherence to their own lack of knowledge. And more intelligent you are, more likely you are to fall into that trap, because, more intelligent somebody is, easier it is for him to imagine that there is something he is unaware of, so that something that doesn't make sense to him actually does make sense. This type of thinking is as flawed as it can get, but it's very common (and perhaps mostly subconscious). In fact, I would argue there are reasons why intelligent but ignorant people are sometimes more likely to believe pseudoscience than actual science. First, pseudoscientists usually have more exciting ideas than actual science does. For example, pseudoscientists often claim to have discovered a method to reliably tell if somebody is lying to you. Those things interest people. Psychologists arguing such methods can't work much better than chance? Not so much. Pseudoscientists often claim they've reconstructed the first human language. Many people find that exciting. They will rather read that than read the linguists explaining their methods are contrary to the methods accepted in linguistics. Second, pseudoscientists usually have shorter rhetorics than the actual science does. For example, pseudoscientists often say things such as that the double-slit experiment proves that bilocation is possible or that the quantum entanglement explains the telekinesis. Now, if people actually read both sides of the story, that is, both what the pseudoscientists write and the actual science of the double-slits experiment and quantum entanglement, they would ask what drugs those pseudoscientists are on. But most of the people don't do that. They think that if someone has a short rhetoric regarding something, he knows what he is talking about. Third, though I am not sure if that plays a significant role, sometimes what makes sense to a scientist is different from what makes sense to a layman. To understand why, consider the following statements: Those statements are false and probably incoherent with what the layman already knows. The metal of the same temperature will cause the ice to melt faster than the wood will for the exactly same reason it feels colder when we touch it. The metal at a room temperature is significantly colder than our body is, and, when we touch it, it takes a lot of heat from our body. A piece of wood, being the same temperature, takes less heat because it's a much poorer heat conductor. A better heat conductor will, of course, melt the ice faster. The second statement is false, because, well, the basic trigonometry. First of all, if the Earth were flat, I hope you agree, there would be no horizon in the first place for us to make this observation. Therefore, simply yelling that the Earth is flat isn't an explanation at all. Of course, those who claim the Earth is flat will claim there is some basically undetectable (for whatever reason) curving of light upwards, and that also can't be considered an explanation. 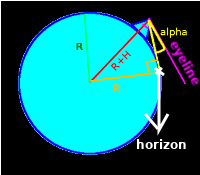 A diagram explaining
why the horizon
appearing to rise
as we climb doesn't
prove the Earth
is flat
Second, if you draw a diagram, you will see that the angle at which you see the horizon is given by the formula (assuming the Earth is a perfect sphere, which it actually isn't, but that's not so important here)

UPDATE on 22/09/2019: I've just posted a YouTube video about pseudoscience in American politics. If you can't open it, you can perhaps try to open a low-quality MP4 file hosted on this server (it can be opened on almost any platform using VLC Media Player). Failing to do even that, you can probably download the MP3 audio.

UPDATE on 08/03/2020: I've just posted a YouTube video criticising climate change denialism, you can see it here. If you can't open it, try this.

UPDATE on 19/04/2020: Here is the Croatian version of my parody of the conspiracy theorists. If you can't open it, try the DOC, DOCX and ODT.