Webpages on this website:
A webpage with a bunch of links.
Homepage
What do I think about politics?
Libertarianism
Why I don't eat meat.
Vegetarianism
Could the universe be a giant computer?
Digital Physics
The webpage you are currently browsing.
Linguistics
Why I like computers.
Informatics
My advice on how to recognize and deal with false sciences.
Pseudosciences


There are around 5000 languages around the world. More than a half of them will go extinct in the next 100 years.

You can learn some Latin phrases I consider useful for Internet forums here.

So, how did I get interested in linguistics? Well, what played the most part are probably the funny things that happened during my Latin classes.
To me, the funniest things that happened is this: The teacher asked a student "What was the name of the Caesar's assistant in the calendar reform?", and he, after hesitating for a few seconds, responded "Gastritis?" Of course, the teacher said "Gastritis?! A man named Gastritis?!" Then we all started to laugh. After a few seconds, the teacher said: "If only it even reminded of, but it doesn't. He was called Sosigenes. Try associating it with English word 'sausage'." After some 30 minutes, the teacher asked another student "So, who was Gastritis?". The student responded with: "He was Caesar's assistant in the calendar reform." Then the teacher said: "Well, you did very well if you didn't know his name." Sosigenes later got all sorts of funny names from the students. Syphilis, Schizogenic, Sisiguz (apparently derived from two Croatian vulgar words)...
The other funny thing that happened was that on the national competition in Latin (I was the 7th in Croatia), someone allegedly mistranslated "Ea, quae fertilissima totius Germaniae sunt, loca" (the most fertile places in whole Germany) as "the most fertile German woman" in the first sentence, and therefore mistranslated the whole text. The text we had to translate in the first part of the competition was about some forest in modern-day Germany. Those fertile places were around that forest. Later that text was about the northern deer, the animals which were believed, by the ancient Romans, to be endemic to that forest. The text later went "Ea nascuntur alces, animalia quae reliquis in locis visa non sint." (There (=in that forest) the norhtern deer are born, the animals which aren't seen in other places.) The student in question allegedly translated that as: "She gives birth to the northern deer." We were allowed to use a dictionary, it's just that, if you don't know the grammar, you can very well mistranslate the whole text, even though you know all the words.
The third funny thing happened when it was a test in Latin and we had to translate a text from Croatian to Latin using a dictionary. The student next to me complained that there is no "ide" (goes) in the dictionary. I told him: "Well, you have to look up the verbs in infinitive." Then he asked: "What's infinitive? I am not very good at grammar, you know." I said: "The verb form that ends in -ti or -ci. For example, the infinitive of 'je' (is) is 'biti' (to be), and the infinitive of 'ide' (goes) is 'ici' (to go)." Teacher commented on it: "You think that he will understand that?!" Then, after few minutes, he asked me: "Hey, what's the infinitive of 'crveni' (red, as an adjective)? 'Crveniti' (red+'ti') or...?" 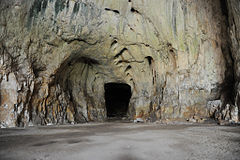 Plato said that
if you keep people
in a cave their
entire lives,
they will be
skeptical of
the real world.
The same appears
to be true
with modern education
system.

So, I've spent years studying linguistics on the Internet, mostly on Wikipedia. I've figuered out that the linguistic education in the schools is very bad. They are bombarding students with controversial statements they have no clue how to evaluate. That would be acceptable if they gave students even the basic idea what linguistics is about, but it doesn't even do that. When I try to talk to those students about actual scientific linguistics, they are being skeptical becuase of their ignorance.
If there was only one thing I could teach you about linguistics, that would be the concept of regular sound changes. That is, the sound changes don't affect just one or a few words in a language, but they affect the whole languages. A sound change that would change "two" to be pronounced "dwo", but wouldn't affect any other word, isn't possible. But a sound change that would change every 't' in the beginning of a word to 'd' is likely. So, if a sound change occurs that changes "two" to "dwo", it will probably also change "ten" to "den". From that simple fact, much about languages can be derived.
For instance, new phonemes are created by two subsequent sound changes, the second one creating the conditions of the first one after the first one ended. For instance, the Latin words "cibus" and "clamo" were both pronounced with a 'k' at the beginning. But let's look at their Italian descendants. The first relevant sound change that occured was a change of the 'k' before the 'i' to 'ch' (written as 'c'). So, the Italian words after that were "chibo" and "klamo". Then what occured was a sound change that changed the 'l' in some conditions to 'y'. So the modern Italian words are "cibo" (pronounced "chee-baw") and "chiamo" (pronounced "kyah-maw"). And that's how 'k' and 'ch' came to be different phonemes. The allophones are created by a sound change changing an existing phoneme in some condition to a sound that's not yet a phoneme in a language. For instance, 'k' and 'ch' were allophones before the second sound change.
The accents are created primarily by sound changes merging the two similar phonemes together. For instance, if a sound change in English merged 'p' and 'b' into a single phoneme, "pin" and "bin" wouldn't become homophones, but words with different accents. Namely, the 'i' is already pronounced slightly differently in those two words.
But here is something we aren't taught at school, but it follows from the regular sound changes. In related languages, one phoneme in one language regularly corresponds to another phoneme in a related language. For instance, the English 't' in the beginning of a word regularly corresponds to German 'z'. Here are some examples: two-zwei, ten-zehn, tooth-Zahn, tongue-Zunge, twig-Zweig, toe-Zeh, too-zu, tame-zahm, token-Zeichen, twinkle-zwinkern... This rule was exceptionless at the time that sound change occured in German. Since then, both German and English have changed significantly, but the rule is still unmistakable and undeniable. And the same goes for other languages, for instance, Latin 's' in the beginning of a word corresponds to Greek 'h': sex-hex (both meaning six), septem-hepta (both meaning seven), sal-hals (both meaning salt), sol-helios (both meaning sun), sus-hys (both meaning pig, the rare English word swine is from the same root), super-hyper (both meaning above), similis-homoios (both meaning similar), sollus-holos (both meaning whole), silva-hyle (both meaning wood), somnium-hypnos (both meaning sleep), sanguis-haima (both meaning blood), sudor-hidros (both meaning sweat), suavis-hedys (both meaning sweet)...
So, according to these rules, it's actually possible to reconstruct the ancient languages from which the modern languages were derived. And many of them have been, to a higher or lesser degree, it's just that the public is incredibly ignorant about it.
The linguistic theses I personally like to support on the Internet forums are my alternative interpretation of the Croatian toponyms, that Illyrian (contrary to the mainstream linguistics) didn't have sibilarization and that the Indo-European language family and the Austronesian language family share a common ancestor. I've described them in great detail in the thread I linked to on the left.
I hope that has some educational value.

UPDATE on 15/12/2017: I am currently developing a web-game about linguistics.

UPDATE on 04/10/2021: I have written a C++ program that outputs an SQL database containing names of numbers in different languages. Maybe it comes useful to somebody. I have also written a seminar about it in Croatian. In case you want to make it work in database engines other than SQLite, you can follow these instructions.